Around 60% of money spent on digital advertising by fast moving consumer goods firms is wasted, according to a new report. While most firms are experiencing gradual improvements with regards to this, a minority are not even monitoring the returns on investing in digital advertising, making it difficult to detect wasteful habits or identify areas for improvement.

Global advertising expenditure is at an all-time high, having become an industry worth well over $500 billion a year. While practically all marketers agree that measuring advertising effectiveness is key to ensuring value for the huge flow of funds into the industry however, a great many clients still feel short-changed by the process. This is particularly the case in digital advertising, which, while it has been lauded as innovative, has proven notoriously difficult to measure.

According to a new report from AlixPartners, less than half of digital advertising spending in the fast moving consumer goods (FMCG) sector fails to see a positive return on investment (ROI). The firm surveyed 1,110 executives across China, France, Germany, India, the UK, and the US, who are or have been decision makers for digital transformation in consumer products companies, to better understand how consumer products companies can successfully drive profitable growth in today’s challenging environment.

In 2018, AlixPartners found that consumer products advertising spending was $242 billion, of which digital advertising accounted for $60 billion. Based on the responses of the firm’s survey, $25 billion – or less than half – of that figure had found a positive ROI. This compared to $27 billion which saw a negative return, and a further $8 billion where the return was not even measured. According to AlixPartners, the overall state of play in digital advertising suggests that there is a learning curve involved, as part of a wider digital transformation strategy.

It ultimately takes time to get a ROI from digital marketing, but leaders in the survey who were monitoring it reported being approximately 70% more efficient in driving positive ROI than those beginning their digital transformations. Success is, therefore, achievable with the appropriate investments and fine-tuning to get it right. This will come as a startling revelation to the minority of companies which are not even effectively monitoring whether their digital advertising spend has an impact, though, as there is no grounds for them to decide how to change their tactics.

Commenting on the findings, Brian Major, a managing director in the consumer products practice at AlixPartners, said, “Many companies, in an effort to chase the promise of growth through digital, have simply thrown money at the problem, leading to billions in wasted investments. However, digital for the sake of digital will serve no one, and as our survey shows, there are many expensive mistakes being made in pursuit of digital nirvana. Success is achievable over time by using more precise and targeted methods, which have greater opportunities for consumer engagement and data analytics.” 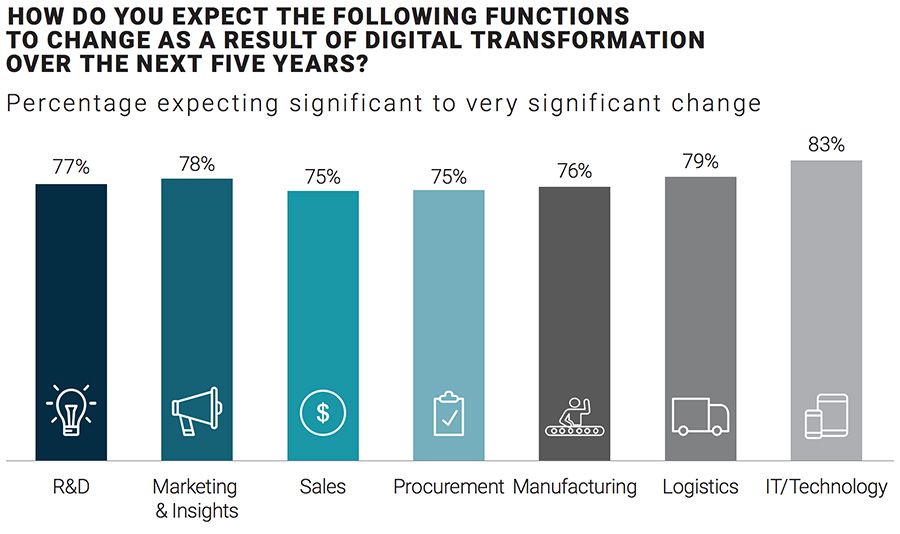 Despite this, the majority of FMCG firms still only class themselves as ‘developing’ or ‘emerging’ digitisers, rather than ‘leaders’ in the field. While India bucked trends in AlixPartners’ research, with close to half of its FMCG firms stating they were digital leaders, the world’s economic superpowers are broadly lagging on their digital journey.

This saw just 19% of firms in the UK state they were in a leadership position, while 24% were still in their emergent phase. With the survey showing that no matter where consumer-products companies are on their digital journey, barriers to successful digital transformation still exist, it might suggest that there is still time for the UK et al to catch up. However, with lack of talent being cited by 39% of all respondents on average as a top barrier, the ageing populations and high employment of those economies may well impede this progress further. Other factors cited were a lack of funding (35%), and an unwillingness to experiment (34%). 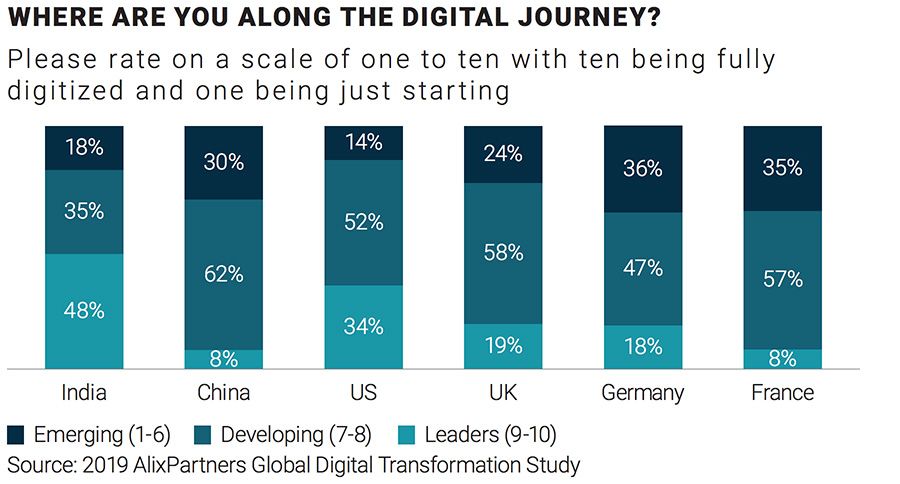 David Garfield, global leader of AlixPartners’ consumer products practice, warned that many large, traditional consumer goods companies had underestimated the complexity of digital transformation. As a result, their long-established brand and channel strategies, a legacy core strength, had made it difficult to pivot to digital.

Garfield concluded, “Many have innovated quite well at a micro level but find it challenging to apply those changes across the whole organisation, as their sheer size and complexity make cultural change difficult. Ultimately for digital transformation to be successful, company leadership, starting with the CEO, must shatter traditional cultural, organisational, and structural silos that are frequently the most intractable impediments to change.”